Multiple studies support that violence and trauma have very debilitating effects on children that may persist even through their adulthood. While everyone can try to prevent violence from occurring in our homes and families, community violence still affects and has damaging effects on everyone.

"PASSION IS WHAT LEAD US HERE"

Vision Safety Solutions Inc. has created a strategic and results-driven training program to assist police, community and school personnel to reduce the threat of community violence. Community groups, government officials, criminal justice professionals, working with school administrators, students, teachers and parents will create a much safer environment for everyone. Recognizing that each segment is important: each relying on the other for their own level of expertise but all too often, do not have the resources to provide all the training they would like, or funding to attend national conferences. Vision Safety Solutions Inc. was created to bring year-round, training to an office near you, thus creating "Training-on-demand," Vision Safety Solutions Inc. helps to empower kids, professionals, para-professionals and community members with information they need in pursuit of sound mental health, social emotional growth and safer environmental solutions, which allows everyone to work towards reducing community violence together. 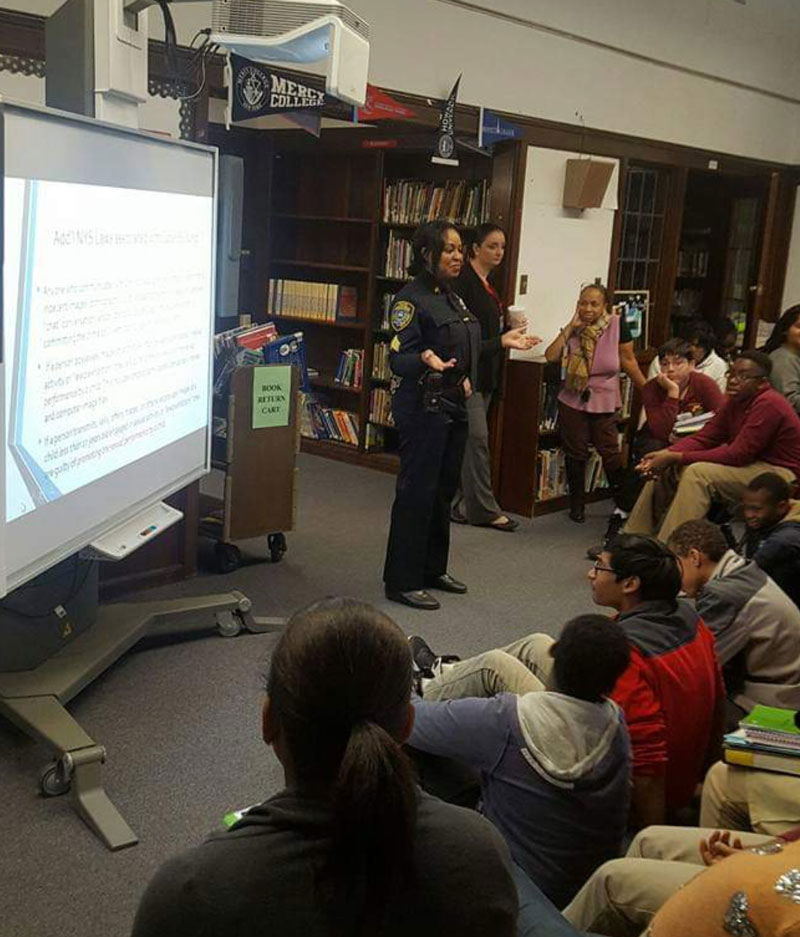 Vision Safety Solutions Inc. was created to bring year-round, training to a location near you, thus creating "Training-on-demand."

Vision Safety Solutions Inc. endeavors to continue to help agencies train Police Officers to be problem-solvers, to be engaged in the community, and to strengthen public safety to reduce the threat of community violence.
Jennifer Carpenter, a retired Police Sergeant with 26 years of law enforcement experience with the City of Mount Vernon NY police department, is currently the founder and Chief Executive Officer of Vision Safety Solutions Inc. She has created a strategic and results-driven training program to assist police, community groups, and school personnel in reducing the threat of community violence in their communities.

During her tenure, Sergeant Jennifer Carpenter served as the Coordinator of 21st Century Policing, a policing model created by the Justice Department following an executive order issued by President Barack Obama. The mission was clear: The Task Force shall, consistent with applicable law, identify best practices and otherwise make recommendations to the President on how policing practices can promote effective crime reduction while building public trust. What became known as the Final Report on 21st Century Policing was also named Best Practices in policing by the International Association of Chiefs of Police.

As the Coordinator of 21st Century Policing, Sergeant Carpenter has created multi-sector partnerships with over 50 different community partners comprised of faith-based, business, education, government, and community leaders. Sergeant Carpenter was able to build a coalition to support the efforts of implementing 21st Century Policing within the Mount Vernon community by focusing on the importance of trust-building through police/community engagement and community surveys as part of a training component of 22 new police officers hired in 2016. 21st Century Policing is about identifying what works for the community and what does not. Her expertise also includes engaging and coordinating with school administrators, school boards, the business community, parents and local government officials, to build and maintain a productive and successful school/police partnership which lead to the creation of a widely celebrated School Resource Officer Program.